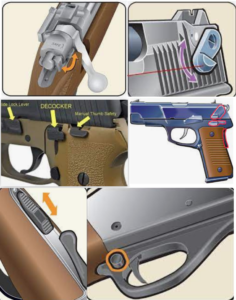 Where is the safety on a gun?

This post explains the importance of gun safety. Trying to keep your gun safe? Check out this amazing idea.

What is a firearm?

A firearm is any lethal weapon of any description from which any shot, bullet or other missiles can be discharged.

Firearms do not cause accidents; firearm accidents are almost found to have been as a result of carelessness or ignorance on the part of the user.

When dealing with firearms, it is compulsory to understand the concept of the safety of the weapon that you have come across to be able to use it properly without causing injuries to oneself or the whole group if one is in a company. All firearms have safety information. some are marked externally while others are internal. Since it is very easy to cause accidents, firearm’s safety, are easy to identify before using.

There are universal set rules for safety to ensure no negligence whenever people acquainted with weapons come across any kind of firearm or weapon.

These are ALL the universal safety rules:

Of all these rules we have four which are compulsory for safe handling of firearms.

They are usually known as the four universal safety rules:

Note: These four must be strictly adhered to.

Most firearms have safety features to help prevent an accidental or negligent discharge.

Early revolvers did not have any safety mechanism on them, so the hammer rested down on an empty chamber so the handgun could not fire, but modern firearms Have internal safety, either a transfer bar or hammer block, to prevent firing without pulling the trigger.

The most common form of safety is the mechanical switch/lever that can be placed in a safe position to prevent the trigger from firing. These are the oldest form of active safety mechanism and are used widely.

Many semiautomatic pistols do not have external safeties or external hammers. So internal safeties are in place to prevent a non-trigger pull discharge. We have Glock pistols which are equipped with a three-part safety system, which consist of independently operating internal-only mechanical safeties, which consistently disengage when the trigger is pulled and automatically re-engage when the trigger is reset.

Here is the list of common safety features of firearms:

A certain amount of manual familiarity with a gun is required to half-cock it.

If the user is unfamiliar with how to engage half-cock position accidental discharges can happen.

Remember, all mechanical devices can and do fail. Safeties are mechanical devices. So do not put your life on them or trust them completely. The safety of a gun is your brain, so think and focus on what you are doing.

Whenever we are preparing to fire firearms, safety must the topmost concern of every operator involved in the exercise to avoid friendly fire or injuring ourselves.

There are set rules and procedures that must be followed to ensure a successive range of work. while conducting this exercise, wearing shooting protective equipment is a must since the spent rounds are extremely hot and if exposed to the skin, there is the risk of getting burned. Therefore, one should have eye protection and hearing protection. The correct usage of shooting equipment is designed to protect the shooter to combat the potential adverse environment of an active shooting range.

Therefore, we must make sure we put on the following equipment every time we are in the shooting practice area:

Loud noises from bullets firing and hot ejected casings bouncing off tables, walls, and stalls drivers are some of the hazards found at a local gun range. The use of shooting protective gear is meant to complement the engineering controls already in place, such as a properly designed ventilation system, concrete walls and floors meeting a minimum thickness, steel dividers between shooters designed to resist sideways bullet penetration, ballistic-resistant glass, doors, ceilings and other construction design elements that are part of the gun range. Shooting protective gear adds one more layer of protection to trainees ensuring a positive shooting practice.

Although rules and regulations state that all shooters must wear protective gear before entering the shooting area, it is the trainee’s ultimate responsibility to follow all range rules concerning the use of protective gear. The protective gear must be worn all the time while at the shooting area because no one can predict what a bullet can hit on its way down. Wearing safety glasses the entire time while shooting is always a very good idea. Wearing safety glasses is especially very important when more shooters are present because more shooters mean there will be more casings and no one wants to experience a hot bullet casing in the eye. Firing guns in a place where sound can reverberate or bounce off walls and other structures can make noises louder and increase the risk of hearing loss. People who don’t wear hearing protection while shooting can suffer severe hearing loss, with as little as one shot if the conditions are right.

In conclusion, gun ranges require all shooting line to wear protective gear, such as, ear protection and eye protection to reduce or eliminate the risk of exposure to loud noise and injuries from hot ejected casings to hurt trainees and operators at any shooting range.